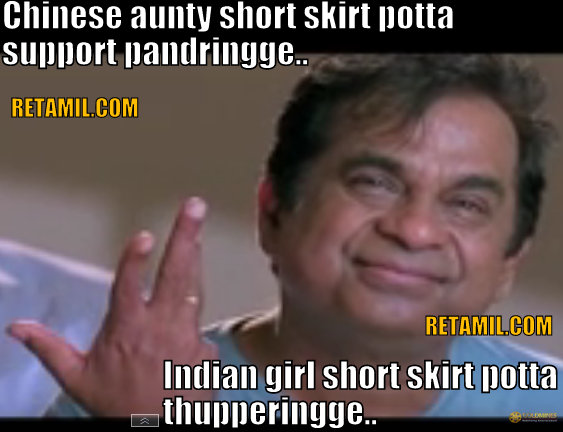 Recently, there was a brouhaha about Farah Ann Abdul Hadi’s gymnastic leotard exposing the outline of her vagina and aunties being given sarong to cover their knees in governmental offices. Many Malaysian Indians were in total support for Farah and expressed concern on the freedom of dressing in this country – dress code. Pic taken from the same page. The caption for this pic on the page is, “
Whats going on?? Skirt itu pun tak boleh ke??”

But, zoom down to the Malaysian Indian community’s dress code, especially Indian girls’ dress code and many of us become incorrigible cynics and hypocrites who won’t think twice to shame and denigrate them in every way and on every platform possible.

Ask any Indian dude how an Indian girl should dress up when going to temples or religious festivals like Thaipusam and watch him list a litany of compulsory dress code – sari, jasmine flowers on hair, bangles, anklets and a shy mien to go with them described as ‘kuninje thale nimirame’ and the overall description being ‘paathone kai eduthu kumbudre maari irukkanum.’

Many Indian girls are condemned for wearing window jackets or modern dress code like jeans and tee shirt to temples and thiruvila. In actuality, it is not girls who are denounced for wearing sari in an exposing way – it is aged, obese aunties. In Facebook pages such as Anti Senju Uderan Kes and Anniyan Thappe Thattii Kekkuruvangge which are literally Taliban Indian pages administered by bigots, fanatics, hypocrites, anti liberals, anti LGBT and misogynists with poor command of English, pictures of such elderly ladies were posted with scathing captions like, “tanker lorry” and “kuppe lorry.” I suppose Hinduism encourages such humiliation imposition. Manu Smriti does but it states that the laws should be changed as times change. By seemingly sticking to the law of restricting the freedom of women, we are adhering to a backward and rigid scripture which has similarities with the aurat, lurah faraj nampak Farah Ann case which we so passionately opposed, we are being plain hypocrites.

On the allegation that Hindu Indian girls are desecrating temple grounds by wearing jeans and tops, how many Hindu Indian men wear veshti sattai when going to temples? Why no one questions the dress code of men? This is similar to the Farah Ann case – Malek Noor the body builder did not get a single flak for wearing only a spender when doing his sporting stint. But of course, it’s the sports’ dress code which applies for both men and women. But only women get trashed for following or not following a particular dress code while men escape clamp down when faced with the same subjection. Indian guys can wear jeans halfway down their butt and the bottom of their jeans sweep the roads to Thaipusam, have their hair styled in spike or have dye which looks like someone has dumped kaara kulambu on their heads but Indian women wearing window jackets are the only ones visible as aberrations. Thaipusam 2015 has changed for the better but when are we going to change our sexist moral and religious policing..?? You think god approves you calling the elderly ladies kuppe lorry and tanker lorry? I’ve seen Indian guys wearing football clubs jerseys and shorts to Thaipusam but no one ever uttered a word against this dress code. If I ask, their answer most probably would be convenient and comfortable but if girls take on on such a dress code, and give the same justification, the response would most probably be, “Comfort and convenience should not be let to get the better of Indian culture.” In the words of Jyoti Singh Pandey’s rapist defence lawyer M.L Sharma, “Indian culture is the greatest culture. In Indian culture, there is no place for woman.” How true vis a vis the status quo.

Dress code in certain places and for histrionics

If Indian girls wear short dresses to clubs and parties then the policing never ends. Indian girls who club and party are frowned upon in the first place. There is no rule that stipulates that Indian girls should refrain from clubbing and partying so keep your ideals to you and the female members of your family and your girlfriend. Don’t stuff your ideals into the throats of every Indian girl walking on the street. You’ll rasikeran Trisha, Samantha and Shreya in skimpy dress code, drooling at them but won’t leave a real life Indian girl wearing spaghetti string not moral policed. What? You expect Indian girls wear bunched up, bulky saris to clubs then get jiggy with it on the dancefloor? Then, there is the disapproval of young and elderly Indian women wearing nighties in the daytime, at home. I would agree that it’s an inappropriate dress code to wear nighties in public anytime but at home? What do you want them to wear then? You will say that Nazriya is so cute when she does the Ringa Ringa dance in a nightie during daytime at home but won’t accept ladies chilling in super comfortable, kaathotam nightie at home while you wear singlet and kaili whenever you are at home, anytime. You’d expect your wife to look like a supermodel at home while you look like a disheveled apek.

Wearing short skirts to work is also not tolerated – Iva enna veleku porala illa boss eh mayakka porala? The problem is not in her short skirt. It’s in your twisted minds that can come up with such conclusions while you rot at your own mundane job. Use the time you spend looking at her legs and judging her dress code to concentrate on your job. Maybe then you’ll be able to catch your boss’ attention and nail a promotion. A workplace in which there are Indians are in abundance is almost always hostile. Everyone would strive to see the downfall of another Indian and will pull the strings for that. If failed then it’s caustic comments to ease the vaithe erichal and porameh. And, if it’s an Indian woman wearing short skirts to work, then her dress code becomes the target no matter if that’s the dress code for women at her workplace. Taken from the same page who asked what’s wrong with the aunty’s short skirt. Only those who are disinterested in useful stuff would follow the dress code transition of Indian girls.

Malaysian Indian girls dancing and the uploading of their moves on YouTube or social media is generally dismissed as bitch, ithellam oru ponna, and the currently famous, ennama, neenggeh ippadi panreengele ma. If the girl/girls dancing wear revealing clothes then a frenzy of negative comments would ensue, inclusive of full blown profanity. Ironically, it seems that using expletives is the way to go to uphold Indian culture. But, it’s okay to feast your eyes on Beyonce shaking her booty and she doing the tongue thing. You’d think she’s got what it takes.

If Indian girls wear swimsuits or bikini by the beach or water theme parks, that’s it la – many Indians, both guys and girls will lose their minds and start to chastise these girls like anything. The appropriate dress code for seaside, swimming pools and water theme parks for ladies is bikini and swimsuit. I don’t wear them but I don’t police anyone espousing that dress code because it’s not against the law, it doesn’t harm me in any way and mostly because it’s none of my business. And then, all of these Indian culture damaging dress code would be assembled in Malaysian Indian Vandi, Malaysian Indian Hot Girls pages and guys can have raging boners looking at the pictures is the way Hindu and Indian culture is being upheld. Also, the admins providing the pictures and the numbers of the girls, courtesy from seeking revenge Indian guys and guys who can’t get a pussy because on the scale of 1-10, they’re not even a zero is the righteous way to foster Indian culture on Facebook. This is what you are doing when you moral police Indian girls. Pot calling kettle black.

You may say that Farah achieved something by wearing the leotard but what about the aunty? It’s not about achievement, it’s about freedom of expression – in this regard, freedom of dress code – a basic human right approved by Amnesty International. One of the best way to develop positively in a wholesome way is to mind your own business. 60% of Sweden’s parliament members are women and there’s 0 prostitution there. How was that possible? Swedes, instead of restricting their women by dress code, conduct code and behavioral code, they focused on the potential of women. That’s why Nordic/Scandinavian countries are the happiest, cleanest, best public transportation and are best countries to live in – 2 of my cousins studied in Helsinki University, Finland and oh my god, their thinking is so progressive. You want to be like that? Start by minding your own business, start reading up on issues that matter, up your general knowledge and get to know the diversity of the world to know that how tiny and insignificant your moral policing on Indian girls’ dress code is and how it is totally unhelpful in uplifting our community and our culture.