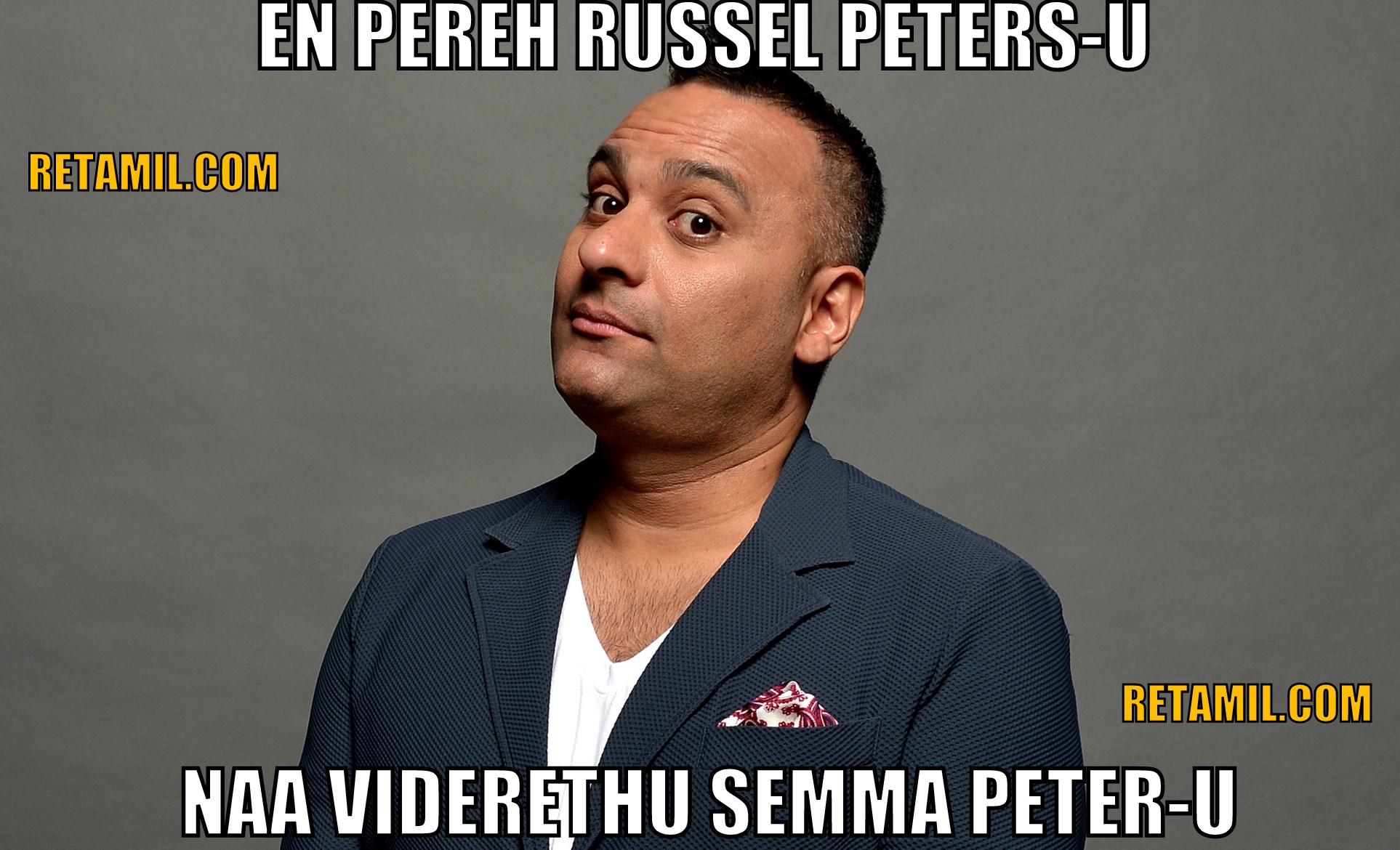 English – Do you spik it?

Time and again I’ve been berated and branded in negative light for speaking and writing in good English. Although I’ve written on this before, a recent transpiration demands me to write about the ever debated Malaysian Indian complex towards fellow Malaysian Indians who speak and write fairly good English, especially Indian girls.

Speaking/writing in English is not to show off

Apart from those Indians who purposely choose to speak in English to people who don’t know English despite knowing the language the people they are know, most Indians, including me, speak in English to be overreaching, which means so that a larger group of people would covered.

Recently, a macha was like I am shaming Indians in front of other races by writing on Indian perceptible negative attributes and that too in English. That was his ‘brilliant’ counter when I criticized the machas beating thara thapette for Ajith’s Yennai Arindhal release in Penang in full PUBLIC view about 2 weeks ago. I should write in Tamil it seems to be circulated only among Indians. I’m like, “What, me writing on how Indians can better themselves in my caustic style is condescending but the average macha’s anarchic behaviour in public is not shaming Indians?” And, not all Indians here are Tamil and neither all Indians here know to how read Tamil, ergo me using English as the medium of instruction, to cover larger audience. When I put forward all those in defence points to the macha and his merrymen, my gender and my proficiency in English became their targets. “Only girls will show off in English,” “Google translate vechi scene poduthu.” I’m like, “Neenggeh nalla varuvingge da..” Okay, let’s just say that I show off, being hoity-toity and vainglorious of my verbosity and acquired English writing acumen not to mention my inimitable sentence constructions. So bloody what? If you can read this, you can Google. There are Free Online dictionary, Merriam Webster dictionary and Thesaurus ready to provide you with English ameliorating and vocabulary expanding services. So, instead of masking your inferiority complex and insecurity revolving not having a good command of English by mocking fellow Indians, especially Indian girls with a commendable cognizance of the language, improve your English prowess. That will take you somewhere, chiding and giving below the belt treatment at those fellow Indians who are proficient in English are not only useless but also LAZY, COMPLACENT, DEFEATIST and mostly BODOH SOMBONG. You can fix BODOH but not BODOH SOMBONG which our Indians have in surfeit amounts.

Many Indian guys on Facebook called me retard, a scene creator and a a white wannabe just because I write in English. Machas would accept Amy Jackson, an English girl as Indian but won’t accept Indian girls speaking and writing English, citing such girls as white wannabees. I am also asked, “Your ass is black right, appo yenthe ‘toot’ ku English pesre,” “Sapudurathu paruppu kari aana enemo pasta saptu valenthe maari pesuthu,” “All fake English, using Google Translate, girls pathi teriyatha?” Is there any rule that if one’s ass is black, they should not speak English? Macha, rather than doing research on what colour my derriere is, brush up your English. Pasta is Italian, not English. I also eat Chinese food so do you see me automatically speaking in Chinese torrents once I eat bah kut teh? Did you see me use Google Translate? Well, butthurt machas can eat their heart out all they want. I won’t lower my standards just because some people can’t keep up with me. If I use bombastic English words, Google the meanings up. It is unfair to ask me to tune my English down a couple of notches down since your English level is not up to mine.

Do you know how that our country’s oldest and the most prestigious education institution, University Malaya, from its top 10 world ranking of top universities in the 1950s and 1960s plummeted to ranking 600 ++ today? It is due to compromised standards of education. Do you see now why it’s extremely important to keep your standards high and elevate the yardstick as time goes on?

The quickest way to silence Indians, particularly Indian girls who are proficient in English is that they are ashamed to speak in Tamil. Also, it is highly feared that if Indians here give utmost importance to English, Tamil would be given into oblivion. First of all, Malaysian Indians generally are a multilingual lot, which means most of us know more than 3 languages. Let me tell you that it is an advantage, not a disadvantage. I for one, am fluent in 4 languages, including my mother tongue which is not Tamil. I also know quite a bit of Hindi. I went to a national school, switch effortlessly from English to Malay to Tamil when communicating with people, speak my mother tongue at home and I am able to understand Hindi movies without the subtitles. I also taught myself how to read Tamil.

It all boils down to initiative and effort. You can speak English while keeping your mother tongue, be it Tamil or any other language alive. I did not speak Tamil until I was 13 and now I can read Tamil. Please know that speaking in English is not at the expense of Tamil. My friend, who is a Tamil school teacher let on me that students in Tamil schools are encouraged to choose English as the medium of instruction when they answer questions in the subjects math and science. That’s because English is the lingua franca of technology. We have to keep up with times, else we risk being left behind. English as a second language is essential for us to be more globally marketable and more widely recognised. 30% of the scientists and technicians in NASA are Indians. Engineering colleges in India teach English as a subject so that students can master the language and go on to be successful.

Listen to Madam Jayantha Shree’s excellent speech on why English as a second language is needed below:

Malaysian Indians are eminent for their impeccable English and it is something we all should strive to sustain and maintain instead of mocking and worrying that if we familiarise the speaking/writing English, Tamil would be forgotten.

Ponder on this info I took from Wikipedia. Without mastering English, the below would not have been feasible:

As Malaysians, it is also imperative for us to be well versed in Bahasa Malaysia because it is our national language. Keep in mind that learning an additional language is adding value to yourself, not devaluing the other languages you already know. And, instead of expecting every Malaysian Indian to be able to converse in Tamil, try learning Malayalam, Telugu or Punjabi because of the reason I stated above. Some Indians here don’t even know what’s Telugu. One auntie was like, “Telugu na jaathi thane paapa..” to me once and my mind voice went, “Suttham..” Keep your language and ethnic Indian nationalism aside and try to know each others’ language and customs as Malaysians of Indian descent as a whole. The government screws us as a whole bunch of INDIANS and the other races here only recognise us as INDIANS.

English is not quantum physics, it’s just another language

What if I told you you need not be awestruck and reserve respect to those who speak/write in killer English because you can do it too?

First of all, stop doling too much respect and too much ridicule on those who speak/write perfect English and get geared up to learn English.

Let me make one thing crystal – I was not born speaking half a dozen languages – I learnt everything I know today by making mistakes – trial and error.

In order to learn from your mistakes, you have to do away your ego and stop expecting others to cushion your insecurity. There are many Malaysian Indians out there with a subpar command of English as opposed to an inflated ego the size of a Goodyear blimp and they expect others to respect them for their level. If they don’t get the respect they demand, they would resort to ad hominem when they are told to hone their English speaking/writing skills instead of making an embarrassment of themselves.

By all means write and speak in English, good command or not, that’s the way to go but don’t denounce fellow Indians particularly Indian girls who speak and write in English as ‘nenepu’. If you have a poor command of English, no problem. But, to combine that with ego and thrashing Indians who have a metier in English is not going to help you in any way.

Writing and speaking in English is NOT A BIG DEAL AT ALL. AT ALL. In the words of Dr Kader Ibrahim, talent is a matter of practice – if you practice writing and speaking in English on a daily basis, in time your practice becomes your talent. But you HAVE TO PRACTICE. There is no going around it. Reading also helps heaps as English is a tricky language. For example, the phrase ‘God bless you’ is grammatically wrong. It should be ‘God blesses you’, singular terms but it has become a norm and politically correct to say ‘God bless you’. You can only understand such anomalies in the English language if you read extensively. I speak and write in English due to necessity, not to show off. IF I CAN DO IT, SO CAN YOU!!

hemashree
Fiverr
Seller
I have 4 years of experience in various styles of writing. I emphasize on quality, accuracy, correctness and punctuality when I do my gigs. I offer world class and globally marketable services on fiverr and satisfaction is guaranteed!