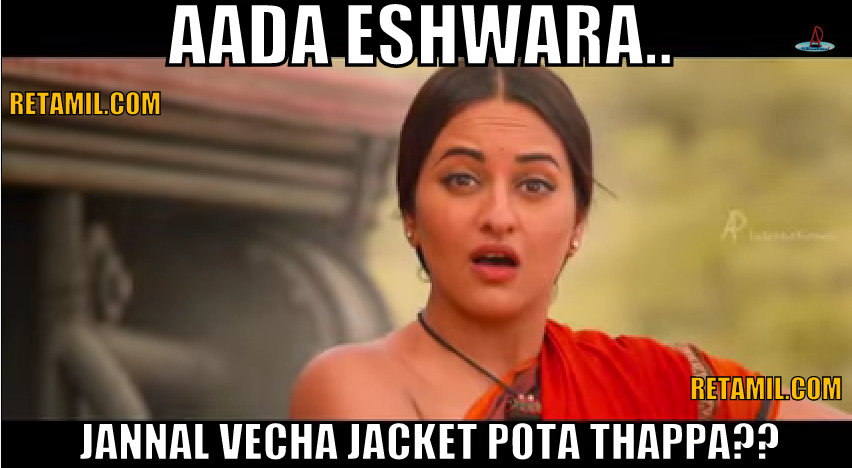 Okay, Thaipusam 2015 was awesome. No fuss, no frills, it was as smooth as silk. Yet, women’s dressing has become an apple of contention again, especially jannal vecha jacket or window jacket.

Why do you go to Thaipusam? To pray or take note of windows in women’s sari jackets?

There was virtually no Mohawk wigs donning machas, vuvuzela blowing machas, tipsy machas doing the kepak dance in front of kavadis, no machas harassing girls, no cinema songs blaring and no gang fights. Finally, Malaysia Hindu Sangam and Malaysian Hindus collectively have exhumed the real meaning of Thaipusam and applied the right way to celebrate and extol Murugan. Syabas and kudos! Pat your backs yall, ugaiz deserve it but it would be even better if the polished behaviour portrayed this Thaipusam be toed for the rest of the year, that is, on ordinary days. While awareness on how Thaipusam should be celebrated has heightened, the moral policing of Indian women has not abated and this article would dissect that, especially the jannal vecha jacket or window jacket.

Thaipusam is that time of the year when Hindus, predominantly Tamil Hindus go to pray to Lord Muruga. But, many end up finding for girls with jannal vecha jacket or window jacket to pick on, on the grounds that such window jackets spoil Indian culture. Let me ask, why do you go to Thaipusam? To pray to Lord Murugan or to take note of window in ladies’ jackets? The derision you put forward when you see women wearing bareback jackets during Thaipusam, “Thoda, Aishwarya Rai poguthu, periya azhagi nu nenepu tha!” “Ithu window illeh machi, door, gate aiduchu!” etc would make you look like the most devoted devotee in Lord Murugan’s perspective? The very purpose of religion is to control yourself but most of us always want to control others in the name of religion.

In comparison with people, regardless of their gender, cutting queues during the pal abhishegam ceremony, taking selfies obstructing devotees who are struggling to get to the sanctum of the temple, squandering away perfectly edible food given away by the temple and annathanam just because it’s free, sexual predators taking advantage of the crowd and littering, ladies wearing jackets with window is the worst crime? Why not even one Facebook moral policing  page is being fair in its moral policing by highlighting the other misdeeds on Thaipusam that I mentioned? I’ll tell you why. Because it’s easier to condemn women than the crimes of people as a whole. Because generally, Indians prefer superficial and hedonistic issues to focus on rather than substantial, impacting ones.  Of course the future of Indians here only lie in Indian ladies not wearing window vecha jacket.

A picture comparing White Women wearing sari with Indian Aunt’s sari, window vecha jacket at Thaipusam has been circulating on Facebook. I think the comparison is unfair because it featured an aged aunty as opposed to a young white woman. I know why such a vis a vis was made. It is not about culture or religiosity; it’s about the difference of being an eye candy and an eyesore. If young girls wear window vecha jacket, it’s definitely eye candy – I saw no Facebook moral policing page featuring young girls with beautiful backs as defiling Indian culture, only obese and overweight aunties with their back boobs and spare tires spilling out of the window frames of their sari jackets and it is, I have to admit, pretty ugly. One has to dress according to his or her age and body size. It has nothing to do with culture and sanctity, foremost, the ugliness of such excessive lipids exposure is what is condemned. The probability of whites not having any idea about our culture is damn high, higher than most of us think.  The white girl in the picture above might have worn sari in an excitement. That’s all. Ask her what’s munthanai and surrukam and watch her go blank.

Ask the same white women to wear sari for every Indian religious and cultural festivals and I won’t be surprised if your stipulation is answered by a plain middle finger at your face.

Culture protectors, here’s the tight slap for you, window jacket or not

So, those who so passionately protect Indian culture, listen to Kamal Hassan for a bit yo. Peel your ears at 0.52 folks, Kamal’s sarcasm at its best.

Like Kamal Hassan mentioned in the video, our culture doesn’t perpetuate the wearing of sari jackets. The wearing of sari jackets was only introduced when the British colonized India. My great grandma never wore a sari jacket. She was like Mudhal Mariyadhai Radha. Even if there was a blouse, it was an upper body full of tattoos. Didn’t you see how Sonakshi Sinha was dressed in Lingaa, during the British colonial period? Hinduism is a moderate religion that is very basic with very simple rules. Don’t do what you wouldn’t want others to do back to you, the very simple basis of karma. PERIOD. Yet, we like being moral police for other people. Let the sinless be the one to cast the first stone. Ancient Indian women were scantily clad due to the scorching Equator sun and it also served another purpose; it was designed so that men could control their lust around women. There are tribal women in Amazon and Papua New Guinea who are topless and there is zero rapes in their communities. Due to this extreme moral policing, breastfeeding mothers are perceived as sexually arousing. Makes me wonder who is primitive and who is civilised.

Don’t get me wrong. I am not promoting Hindu culture, going topless nor Victorian culture here. All I’m saying is that dressing up as one likes is one’s individual rights. Don’t like your rights being taken away? Then don’t take away the rights of others. Humans first started to wear clothes to protect themselves from the elements, after losing the evolutionary bodily hair. Modesty, cultural dressing and fashion came much, much later and window sari jacket is not an exception.

Nowadays, human rights and individual rights are rapidly overriding culture. Culture is evolving to suit present times needs and relevance so don’t gimme this bullshit that you are ‘just protecting culture’.

hemashree
Fiverr
Seller
I have 4 years of experience in various styles of writing. I emphasize on quality, accuracy, correctness and punctuality when I do my gigs. I offer world class and globally marketable services on fiverr and satisfaction is guaranteed!